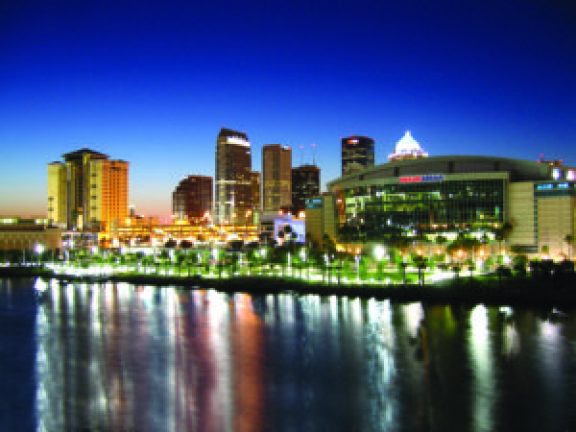 In many states, patronage at outdoor events is inhibited during the winter months — not so in Florida. Mecum Auctions, for example, enjoyed a very healthy attendance of around 30,000 at its January event in Kissimmee. In fact, attendance at the world’s largest collector car auction has increased annually over the 10 years it has been held at Osceola Heritage Park, and the show remains the best attended of the 18 auctions Mecum holds. “We started it there as a very small event with 200 cars, and it’s now become a 3,000-car, 10-day auction,” notes Harold Gerdes, VP of Operations with Mecum Auctions. “And at this point, along with all the memorabilia that we’re selling, we’ve pretty much maxed what we can do over that amount of time.” Helping to optimize turnout is Osceola Heritage Park’s location, about 10 minutes from the Orlando International Airport, which is especially ideal for the auction’s international guests. “Orlando’s theme park attractions have destination appeal and people don’t just come for an auction; they bring their families and make it a vacation,” Gerdes adds.

Geographic location is indeed key to maximizing revenue from an event, but so is the viability of the facility as a business partner. And the SMG-managed Osceola Heritage Park shines as one of Florida’s most flexible venues for concerts, fairs and festivals, and the like. “They’ve got a over a hundred acres and a lot of room for all the things we do,” says Gerdes. “We put up 10 acres of tents with just cars, and we use the arena with the raised seating for the auction itself, so it plays out well. This year we changed the layout to add a huge exhibition tent with flooring, lighting and glass walls, and it became the highlight of the whole event. We had several multimillion dollar cars housed there and had a huge video wall. Osceola paved all of that for us as part of the multiyear deal we signed. They improve the facility each year in some way; many places don’t do that.”

One very significant venue improvement project in Central Florida is the upcoming $14 million renovation of the venerable Lakeland Center, scheduled to begin next summer. One aspect of the renovation, the first since 1996, is ADA compliance. “We were built in ’74 so we were grandfathered in from an ADA perspective ever since then. Now we’re going to bring the arena up to code,” explains Scott Sloman, Assistant Director. “We’ll also work on the façade of the arena so it has a much nicer presence, add an escalator to the first level, get a new sound system for the arena and put new videoboards in.” The Lakeland Center also has a new dashboard system that will allow it to support the Florida Tropics, an indoor soccer team that begins play at the arena in November.

In nearby Tampa, The Straz Center for the Performing Arts has its own plans for the future, dubbed the Master Plan. The idea is to make the Straz Center a true Riverwalk attraction, not simply a venue to see a show. Effectively, the Straz Center will be integrated with Mayor Bob Buckhorn’s InVision Tampa plan, which includes Center City projects such as the completion of the Tampa Riverwalk, the restoration of the Federal Courthouse, the evolution of the Encore district and the construction of downtown residential towers. A feasibility study is currently underway for the $65 million-$100 million Master Plan, which calls for the creation of a Grand Terrace that flows to the riverfront, expanding the Patel Conservatory, reinventing and enlarging the Silbiger Lobby in Morsani Hall and adding a multipurpose events center to accommodate growth in food and beverage, education and artistic programming.

Like the rest of the industry, the Central Florida entertainment scene — home to Osceola Heritage Park, The Lakeland Center and The Straz Center — has been under a pall since last month’s tragedy at Orlando’s Pulse nightclub. The deep questions raised about venue security will surely inform future measures at entertainment venues. But the future also holds the promise of an even stronger Central Florida live entertainment industry, given the forward-thinking management at its major facilities. Following is an overview of some of the state’s other popular tour-routing stops.

Originally known as the Ice Palace, Amalie Arena opened in 1996 with a show by the Royal Hanneford Circus. It went on to enjoy highlights such as four consecutive sellouts by Garth Brooks, Elton John and Billy Joel performing together in 2009, and Roger Waters’ performance of The Wall in 2011. Home to the Arena Football League’s Tampa Bay Storm, the arena has also hosted the 1999 NHL All-Star Game, the 2007 ACC Men’s Basketball Tournament, the 2008 NCAA Women’s Final Four, the 2009 SEC Men’s Basketball Tournament, the 2012 Republican National Convention, the 2012 NCAA Men’s Frozen Four and more. 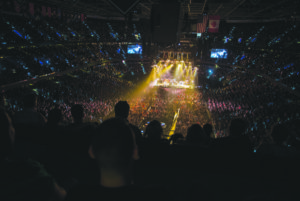 TECH AMENITIES: First NHL building to have Apple Pay. Internet Protocol Television (IPTV), which allows partners and messaging to engage with fans over 600 TVs located throughout the concourse, suites and premium areas. Fan Cap, which allows fans to have a chance to see themselves live on the scoreboard during events. All clients and guests have the opportunity to manage their sporting and events tickets online with digital ticketing.

EVENT PROMOTION: Amalie Arena has a marketing team that has the ability to secure media buys and promotions using venue’s contracts and existing discounted media rates.

LOCAL MARKET: Tampa/St. Petersburg is the 11th largest U.S. market, with over 3.7 million people and growing. With ticket sales that dominate the Tampa market, the Arena also draws guests from large surrounding cities like St. Petersburg, Sarasota, Lakeland and more.

Located in Downtown Miami on the waterfront of Biscayne Bay, the 19,600-seat AmericanAirlines Arena ranks among the nation’s top 10 venues annually for total ticket sales and among the top 5 for Latin entertainment. The arena has hosted top artists such as Katy Perry, Coldplay, Marc Anthony, Justin Timberlake, Pitbull and Jay Z, and top productions such as Harlem Globetrotters, Disney On Ice, Ringling Bros. and Barnum & Bailey Circus and WWE. For smaller events, the elegant Waterfront Theatre is available with a capacity of 5,700. The arena is also a forerunner in sustainability. Last month, The HEAT Group—parent company of the Miami HEAT and AmericanAirlines Arena—has been named the first-ever Environmental Innovators of the Year in the NBA category by the Green Sports Alliance. 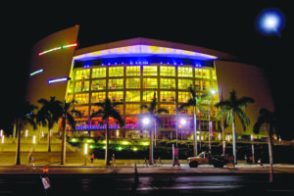 MARKETING: Full-service marketing department offers advertising expertise and relationships with local media outlets. In addition, the HEAT Enterprise management team works in partnership with promoters to showcase events through a variety of methods and relationships.

The Amway Center has hosted top acts such as Paul McCartney, Taylor Swift, Bon Jovi, Elton John and the Eagles, as well as milestone sporting events such as the 2012 NBA All-Star Weekend, World Championship Boxing and NCAA Men’s Division I Basketball Championships. Home to the NBA’s Orlando Magic and the ECHL’s Orlando Solar Bears, the Amway Center won the international 2013 Customer Experience Award from The Stadium Business Awards. 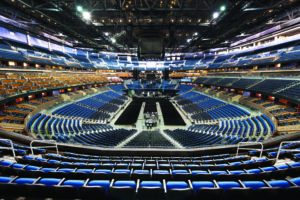 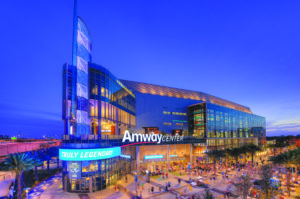 OTHER FEATURES: Two full-service restaurants including Jernigan’s, which overlooks the arena bowl, and Magic Grill at street level on the northwest corner of the building. There are
22 permanent stands and numerous other concession options on multiple concourses.

The Lakeland Center is located minutes from Tampa and features a multipurpose arena, two exhibit halls, a theater and several meeting rooms. The George Jenkins Arena has hosted music legends from Elvis to Led Zeppelin to Rod Stewart since it opened in 1974. The facility also hosts FHSAA basketball, wrestling and volleyball tournaments, livestock events, monster trucks, professional wrestling and more. 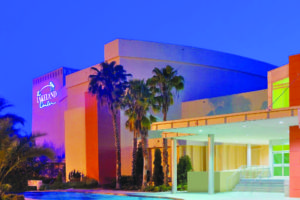 LOCAL MARKET: The Lakeland Center is conveniently located between two major Florida metropolitan markets and is the premier entertainment venue and convention center for Polk County. More than a million visitors a year enjoy events at The Lakeland Center and the potential media reach is over 10 million residents.

The only venue in Central Florida that has 150 wide-open acres, an indoor Arena and Conference Center, Osceola Heritage Park provides promoters with total flexibility for festivals, fairs, concerts, extreme sports, rallies and more. 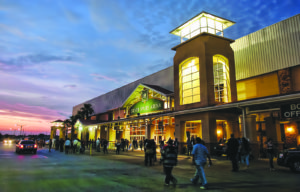 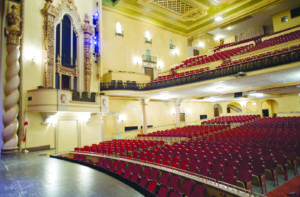 The Straz Center for the Performing Arts Tampa • strazcenter.org

The David A. Straz, Jr. Center for the Performing Arts has welcomed more than 10 million guests since it opened in 1987. As the largest performing arts complex south of the Kennedy Center, the 335,000-sq.-ft. Straz Center boasts one of the nation’s leading Broadway series and is nationally respected for producing grand opera, as well as presenting a wide variety of concerts, performances and events. 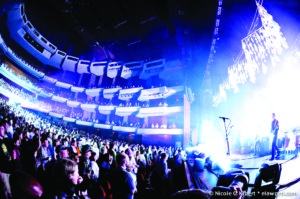 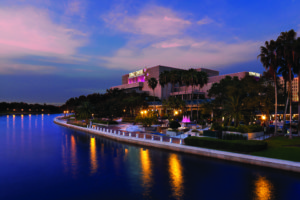