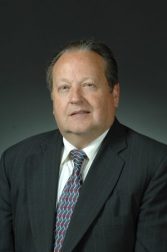 Osterhout, 69, retires on April 28 with a celebration joined by coworkers, clients, partners and many other friends. “Dave O is irreplaceable. Someone will succeed him, but nobody will replace him,” said Luther Villagomez, Houston First’s Chief Operating Officer, who opened the GRB in 1987 and has worked side-by-side with Osterhout since 1989. (Villagomez is a 2017 F&D ELITE Award winner.)

“There is not one square inch, not one aspect of operation, in this convention center that Dave is not intimately familiar with,” Villagomez said. “He has been the driving force in every capital project over the years and his input has been critical to the success of new construction projects and operational improvements.”

He was integral in both the Phase II expansion in 2004 and the most recent Phase III renovation. Through his guidance, the George R. Brown earned its original LEED certification in 2011, under the requirements set for existing buildings.

He was essential to the success of the Super Bowl NFL Experience in 2004 and 2017, Texaco Grand Prix, American Public Transportation Expo, and International Deli Dairy Bakery, just to name a few events.